Perth hosted the world’s largest public art event with no less than 40 life sized cows strategically placed around our beautiful city. The cows were originally blank canvases which were painstakingly crafted, sculpted, painted, reconstructed and transformed into works of art by some of Western Australia’s talented artists.   Y Striders became tourists in their own town for a day and discovered areas of Perth they did not know even existed when they hoofed around under the guidance of Dave (Moo Moo) and Susan (Missy Moo). They were entertained by Dave and Susan’s hilarious cow themed questionnaires and subsequent prizes whilst at the same time adding about 10kms to the total distance in their logbooks.
Those people who joined in at lunchtime could be excused if they wondered what was going on with various groups of Y Striders huddled together, jealously screening from prying eyes what looked like a piece of paper with a drawing of a cow! What on earth was going on?? We soon discovered that Dave and Susan had set their own competition for the very best decorated cow and Y Striders being ‘not-at-all-competitive’ were doing their very best to secretly win the prize. Considering they had no pencils, paints or crayons with which to create a work of art, the results were no less than amazing! They used red wine, sticks, leaves, flowers, wool, cigarette butts and anything else they could find to create a prize winning cow.
Many thanks to Dave and Susan for organising this walk and for the work they put into the itinerary, competitions and prizes. Everyone had a great day, and if they arrived home pleasantly exhausted, they were all very happy to be able to say they had ‘been to see the cows’. 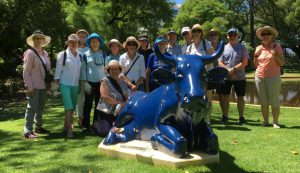 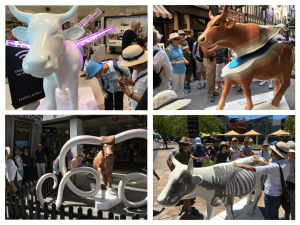 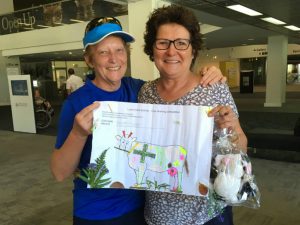 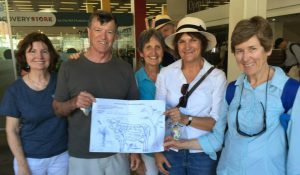