What was the highlight of our hiking trip to Tasmania?
For some it was the variety of spectacular walks, for others it was the fresh seafood, scallop pies or the beautiful scenery. But best of all, it was the company of our travelling companions, the animated talks, hilarious banter and knowing that at the end of the day we would share a cheese platter and perhaps (?) a glass or two of the local vintage wines. Somehow we managed to bump into each other in towns along the way, and thanks to Graeme’s Y Strider labels on the back windows of our cars; we could even identify our travelling companions in the carparks of the local Woolworths Supermarket or Christmas Hills Raspberry Farm Cafe!
Two days prior to the main group’s departure date, Karen, Mary, Kerry, Elizabeth and Darryl flew to Tasmania and drove from Hobart to beautiful New Norfolk. From there it was a short drive to the Agrarian Kitchen in Lachlan (pronounced Lacklan) where they were treated to a cooking class with a difference – a paddock-to-plate experience where the day included donning the gumboots to forage for the home grown ingredients, harvesting, cooking, learning, eating the amazing creations and drinking Tasmanian wines. What a wonderful experience to learn from Rodney Dunn, former Food Editor of Australian Gourmet Traveller magazine and one-time apprentice to Australian chef, Tetsuya Wakuda. 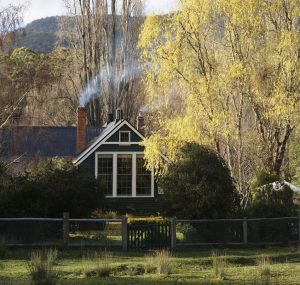 Nancy and John also arrived in Hobart prior to the group’s arrival and wasted no time checking out the various hiking trails around the city and visiting some of the iconic sites – for example MONA, the Museum of New Art. Together with Bill, they climbed Mount Wellington…..to the TOP!! It was a ‘challenging’ climb, said Bill! And then while the rest of us checked out MONA the following day, the three of them recruited Graeme, Deb and Ken to climb to the TOP of Mount Nelson!!! 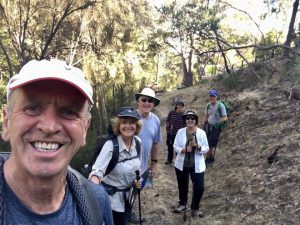 And then it was onwards to Strahan (pronounced Strawn) where Julie and Wayne joined the group.
On the way to Strahan we visited the ‘Wall in the Wilderness’ – an amazingly beautiful work of art 3m high and 100m long, hewn and sculptured from Huon Pine. The Wall depicts the history, hardship and perseverance of the people in the Central Highlands and pays homage to those early settlers in Australia by telling an inspirational tale of how life was back then. A life which needed to be recorded before it is forgotten!
At Strahan we took a boat ride and cruised through the narrow entrance to Macquarie Harbour, named Hells Gates by the convicts when on their way to their punishment on Sarah Island. We visited Sarah Island and listened to a well presented narrative about its very sad beginnings and its eventual demise. We saw the high-tech aquaculture for the farming of Tasmania’s famous Atlantic salmon and ocean trout. We cruised past the rugged mountain ranges in Tasmania’s World Heritage listed South West Wilderness National Park and spent two hours in the serenity of the imposing Gordon River, completed a stroll into the rainforest where we learnt about the Huon Pine and its extraordinary qualities. We enjoyed a sumptuous buffet lunch freshly prepared on board – smoked salmon, cold meats, a selection of salads, fresh fruit, Tasmanian cheeses and local breads. 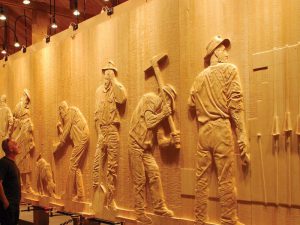 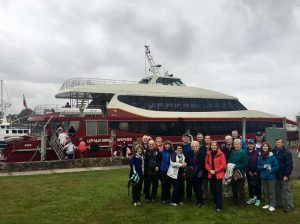 Our next destination was Cradle Mountain where the weather was chilly and wet.  Situated in the Cradle Mountain-Lake St Clair National Park and at 1,545 metres above sea level, it is the fifth-highest mountain in Tasmania. Our presidents – previous (John) and current (Ken) scrambled over huge boulders to make it…. to the TOP! Nancy, Bill, Darryl and Graeme made it to Kitchen Hut, 1km from the summit – this in itself is an amazing feat! Rosie, Brian, Karen and Mary negotiated a steep and physically demanding walk to Marion’s Lookout. The rest of us walked around Dove Lake, the boardwalk, explored the Enchanted Forest, or visited the Waldheim historical site (built by Gustav and Kate Weindorfer in 1912).
We celebrated Julie’s birthday and said farewell to both Julie and Wayne while at Cradle Mountain. 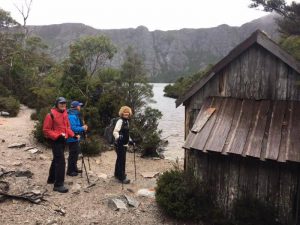 And then it was onwards again to reach Stanley in the far north west of Tasmania. We decided to take advantage of the good weather the same day and climbed the Nut – a 143-metre high massif, rising from Bass Strait and towering above the town of Stanley.  This picturesque town was featured in the movie “Light Between the Oceans”. The initial walk up the Nut to the plateau is 10-20 mins, along a very steeply paved path, followed by a walk of 2.3kms around the top of the Nut.
That night we celebrated Mary’s birthday at the Stanley Hotel. 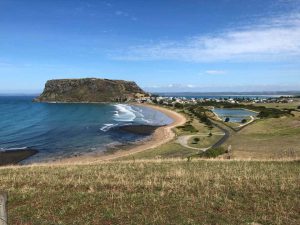 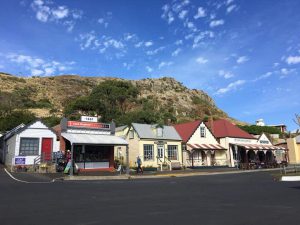 From Stanley, we drove to Launceston (pronounced LONceston) and along the way visited the House of Anvers (chocolate), Ashgrove Cheese (all sorts of cheese), Christmas Hills Raspberry Farm Café (raspberry everything) and in Deloraine, the Yarns in Silk (each panel 3m high and 4m long).

The group mobilised for a walk in Launceston’s own piece of wilderness – Cataract Gorge, just a short 15 minute’s walk from the city centre followed by a 1-2 hour circuit of the gorge.
We said farewell to Ann and John at Launceston.

On the way to Coles Bay (Freycinet), some of us visited the thundering St Colombian Waterfalls – just a short 30 minute walk along a tree fern lined path, and the Pyengana Dairy Company (all sorts of cheeses, Devonshire teas of scones and clotted cream).  At Coles Bay (Freycinet) some of the group completed a 12kms Wineglass Bay and Hazards Beach Walk on Tasmania’s east coast. The lookout to Wineglass Bay was just spectacular! 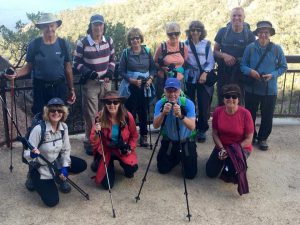 The next day was our cruise to Wineglass Bay but unfortunately the ocean swells were too great. Instead we were taken to the calmer waters in the lee of Schouten Island (pronounced Shouten) where dolphins entertained us with their antics, swimming across the bow of the boat and seals basked on the rocks.  Compensating for not being able to get to Wineglass Bay, we were able to watch a Chinese film crew as they assembled and used a drone to film the boat and the surrounding scenery.
From Coles Bay we drove to Port Arthur, calling in to see the Spiky Bridge, the Tessellated Pavement, Blowholes and Tasman Arch, Remarkable Cave and the Dog Line at Eaglehawk Neck along the way. 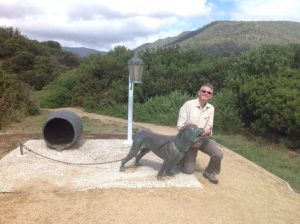 Our scheduled (and final) walk in this area was part of the Three Capes Walk to Cape Hauy (pronounced Hoy) – about 9kms. This was a tough walk, involving a LOT of steps – the equivalent to completing the Manning Steps eleven times up and down. We had three groups – the Streakers (fast), Striders (medium speed) and the Strollers (slow walkers). Christine, Faye and Elizabeth walked part of the way with the intention of turning back when the going got tough. In typical Y Striders fashion, the faster ones looked after the slower walkers.
Christine wrote: “the age of chivalry is not dead! After the ‘Striders’ and ‘Strollers’ got a head start, the ‘Streakers’ soon passed us all. It was a long climb – a LOT of steps! Groups soon parted but Sir Kenneth, Sir John and Sir William fought their way back on the Cape Hauy track to check on the ‘fair maidens’ – Elizabeth, Faye and Christine – to encourage them on to the lookout which according to Graeme was only 10 minutes away (but in reality it was 20 minutes!!)”
Darryl said, “The Grand Old Duke of York marched us up to the top of the hill and then he marched us down again!”
Bill said, “this is the BEST walk I have ever done!” 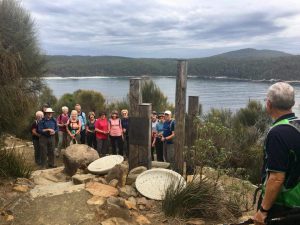 And then there was Port Arthur, worthy of a visit and reflection – established after Sarah Island closed.  It was intended as a penitentiary of harsh punishment for Britain’s convicts, many of whom had committed minor offences and sentenced to transportation. It didn’t matter whether it was for 7 years or life – they would never be able to find the means to return to Britain. Sadly, most of the buildings have been destroyed by fire and the  bricks and timber have been dismantled and used in other building projects throughout Tasmania. Nowadays, this beautiful but sad site is a vibrant tourist attraction. 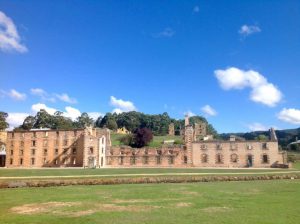 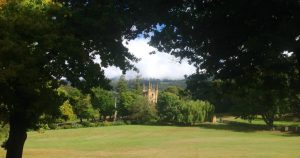 Homeward bound – last stop Richmond where the historic and oldest bridge in Australia was built by convicts in 1823. 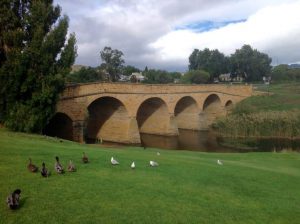 And then it was happy birthday to John!!
For our Tour Director – Graeme!
Where would we have been without his excellent research, guidance and informative documentation for this trip to Tasmania? We are grateful for everything he did – from the original reconnaissance, the original group discussion meetings, advice for booking the airline tickets, the massively informative accommodation notes which assisted everyone to make well- informed choices, for arranging our walks, providing us with top-notch activity choices, the Tour Director talks, but most of all – for being the person who made it all happen!
THANK YOU!