I figured the running crew from Tuesday and Thursday nights would be nurturing a passing interest in my Half Marathon performance considering the enthusiastic send-off and best wishes on my last night at the pavilion! 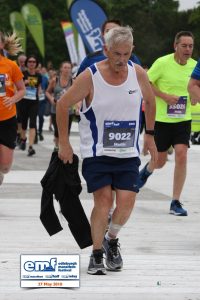 On the day of the race, Edinburgh was experiencing a cold snap during some favourable weather. It was forecasted that morning not to rain but the traditional dreary Scottish mist blanketed the start with the freezing drizzle soaking into the bone. The weaker runners, like me, had brought throw away tops to wear and to discard after the first km or so. Owing to the cold and unpredictable conditions, I decided to keep mine on and continue with the race.
The whole event was very well organised, so that competitors were seeded together into their expected finishing times. I was with the 2hr 10 mins group! The race started bang on 9am and the greyhounds at the front took off, I think, cos my group was locked in a side street some distance away and took 15 minutes to walk/shuffle across the start line.
The route through Edinburgh’s city centre was postcard interesting. As I was still fresh up to about 8kms, I really appreciated the ancient monuments and crumbling castles. From then on the throng of runners of all shapes and sizes (and ages!!!) dragged me through wooded glades, parks, past rivers open fields and the odd ancient monument, all of which I gave scant regard as the inevitable chronic fatigue began to raise its ugly head.
At 14kms approximately, the course wound its way to the coast at Portobello with a dog-leg of about six agonising klicks to the finish. With about 500m to the end I suffered agonising cramp on the inside top of my leg, the name of the muscle group the physio explained later, I couldn’t pronounce. When it hit me, to get to the side of the road, I had to hop and jostle through the mass of runners all of whom were cranking it up as the smell the finishing line was growing stronger and they weren’t taking prisoners. Clutching my leg, I had several offers from spectators who were willing to jump the barriers and help me to the finish. A kind offer I politely declined. Nonetheless and after a short time, I got going again stopping only to remove my top to sprint with my fellow combatants to the finish (as you do) in a time of 2 hrs 5 mins. Unfortunately my time was not recorded on the official results but my GPS saved the day from start to finish.
If anyone is interested I have a detailed map and route of the course for perusal. The administration and organisation of the whole event is a tribute to the enthusiasm and hard work of the organising committee and volunteers.
Martin K  (your fellow Y Striders member)

9 thoughts on “Edinburgh Half Marathon”