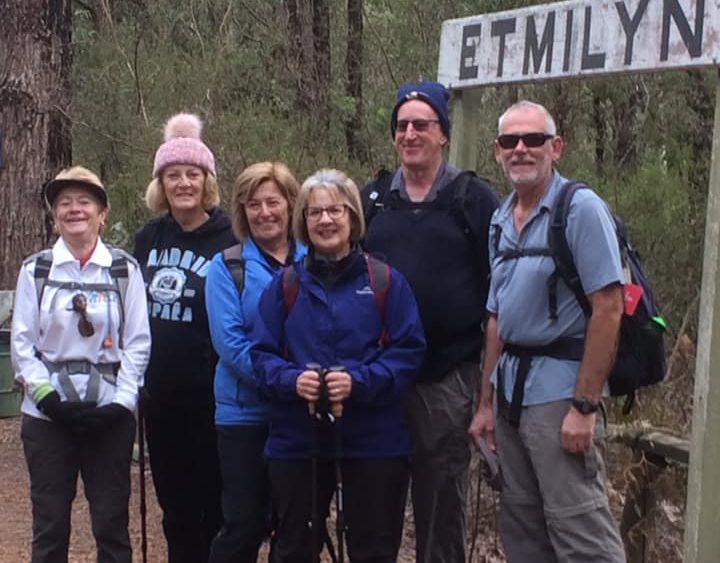 Posts re the Balingup and Stirlings legs of the trip are to come . . .

Ever heard the saying:  ‘Time spent in reconnaissance is seldom wasted’?  Well, the Dwellingup/Balingup/Stirlings trip down south, beginning Thursday August 6, was to be a ‘recce’ for a proposed Striders’ long weekend trip next year.  Customarily, these ‘recces’ are undertaken by Bill, Kevin and Pam (for the walks), and often ably assisted later online or by ‘phone by Tracey, Faye, Karen and others who survey the social/shopping opportunities.

But there’s another saying too:  ‘The ol’ bait and switch’.  Most commonly used in the car industry, this refers to offering one car as an incredibly unbeatable buy, only to find, upon visiting the car yard, that that particular vehicle had ‘just been sold’ but, ‘now that you’re here – have a look at these beauties!’

Well, there was a bit of ‘bait and switch’ going on – on the Dwellingup leg of our three days away Aug 6-9.  The bait was an opportunity to form a party of nine for some walking and socialising in Dwellingup.  In fact, Bill’s invitational email read:  ‘Kevin, Pam and myself are going on a bushwalking holiday . . .’  Ken and Deb, Chris Booth, Deb MacDonald and Graeme and former member Anne all took the ‘bait’.  ‘How wonderful to be invited and included in a bushwalking holiday’ – we thought.  The ‘switch’ was that we soon learned we were simply making up the numbers on a standard reconnaissance trip by Kevin, Pam and Bill, providing some company and amusement that, one could suggest, might otherwise be sorely lacking.

Getting past the feeling of being used by the organisers, we checked into our respective lodgings (Motel/Airbnb/caravan park) and met at the raucous ‘Dwelly’ pub for a meal on Thursday evening.  Packed to the rafters with a few locals, but mainly with timber mill workers spending their last night of the week in town before heading home for the weekend, we ordered ‘the usuals’ – chicken parmies, bangers and mash, lamb shanks and, for Bill, an obscenely large serving of pork ribs.

Drinks were ordered too – from the bartenders, one of whom must have missed the memo that ‘skimpy’ barmaids were, for good reason, to have been phased out long ago.  All the SNAGs (sensitive new-age guys) in our party of Strider males exhibited commendable sensitivity and discipline when ordering drinks – focusing their fixed gaze on an imaginary object, high on a shelf behind the bar.

We were in for two days of fine weather before a large storm front was to hit the South West on Saturday night.  On Friday, after meeting for coffee at the Blue Wren Café, we embarked upon a 12km section of the Bibbulmun track – from the Inglehope Siding back into Dwelling up.  Photos from that walk have been posted on Facebook Connect.  The easy 12km left us with time to refresh ourselves before heading for drinks and nibbles and, later on, take away pizzas at Graeme’s.

Thanks for a lovely warm evening Graeme.  Your skilled use of the log splitter at your Airbnb meant that we kept the slow combustion stove ticking along nicely all evening.  [Of course, as most will know, Striders’ evenings usually wind up somewhere between 8 and 9 o’clock.  This night was no different.]

On Saturday, the ‘organisers’ began the day early by visiting the Blue Wren once more – before tackling two additional walks.  The remainder of the party ‘coffeed-up’ at the Blue Wren – but at a later, more civilised hour.  They would content themselves with just one of the walks.  It was enjoyable walking through relatively open new growth forest on a gently undulating path, with dappled sunlight providing ideal walking conditions.  As it was for Friday, our walks were again completed back in Dwellingup – giving us plenty of time to visit local gift shops or to venture off road (in Chris’s VW Amarok) to nearby falls and dams.  The plan for the evening was to head for Bill’s Airbnb for a BBQ.

After the usual Strider chit chat (injuries, families and travels – although not always in that order) the evening was extended – even beyond Striders’ usual bedtime – to 9:30pm(!) – by a challenging and hilarious game of Charades.  Once up to speed on the conventions (genres/titles/syllables/sounds-likes/shorten/lengthen/tense etc.), even the serious imbibers displayed an uncanny ability to hone in on the answer with minimal signing.  Next morning Chris even continued over coffee (again at the Blue Wren) with: ‘movie’ – ‘three words’ – ‘first word’ – then an acted-out yawn and stretch.  ‘Sleepless in Seattle’ shouted the table!

After coffee, Ken and Deb, Deb MacDonald and Chris all headed back to Perth while the others headed for Balingup, where Leonie, Ros (and friend Judy) were to join the party for more socialising and reconnaissance.  Later, the Stirlings awaited, so the group could continue Bill’s ‘bushwalking holiday’.  In the end, we were glad we took the bait.

One thought on “2020 Dwellingup Walkers”