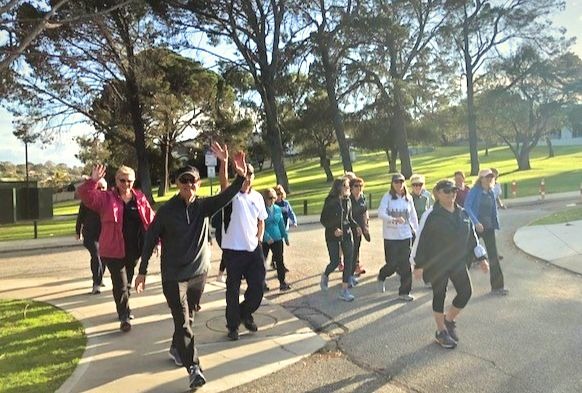 What a wonderful turn out as 30 enthusiastic Y Striders met on Sunday morning to participate in the 2020 Anne Rinaldi Fun Run/Walk.  Trainer Anita, took everyone through warm-ups and stretches and everyone was feeling excited as trainer Deb counted us down to the start. The runners sped away leaving the walkers to begin their more leisurely start to the morning, joined by trainer Zoe, as well.

This event takes place along the beautiful East Fremantle foreshore and Y Striders loved the chance to be out in the fresh air, enjoying this delightful part of the city.  The weather was beautiful with no showers in sight.  Thankyou to Terry P who put out the turnaround point signs for each of the different run/walk limits.

Many of the walkers completed the 6 kilometre walk or less, but the runners had other plans.  There were some runners who did shorter distances, but there was a large contingent of runners who completed the full 12 kilometres! Joan and Bill were the first two across the finishing line with a time of 1 hour 16 minutes!  What an amazing effort.  It was not long before the rest of the runners had returned, all of them completing the distance in great times.  Our runners, who have been training hard and who have suffered from the lack of competition in events due to COVID cancellations, showed us all how strong and fit they were by performing so well today.

One of the best things about the Anne Rinaldi event is the breakfast reward earned by all competitors.  That is, the delicious and famous, Darryl’s Bacon and Egg Strider Muffin cooked and served at the home of Ros C.  Although Darryl was not cooking this year, John and Colin managed this task admirably.  They were assisted by Elizabeth T, Ann R and Mary N.   Ros C and Leonie H cut up a massive bowl of delicious and well appreciated fruit salad.

Joan de C gave out some amusing awards to club members.  Kaye and Terry P, trainer Zoe and Bill S, Leonie H and Joanne F, and Ann R.  Following these awards, President Ken, spoke to the assembled club members about the Honorary Member award.  The recipient of this well-deserved award was Darryl Turton.  Ken outlined the reasons why Darryl is a worthy recipient of this prestigious award:

Darryl was a founding member of Y Striders in 1997 and from the beginning was always working for the benefit of others, preferring the behind-the-scenes contribution to management committees.  He measured and signed road routes, participated in fun runs and walks and organised and ran the sausage sizzles.  Darryl would willingly do the lifting, dragging, carrying and setting up, then Darryl would compete in the event, race back to the BBQ, do the cooking, followed by  reversing the logistical exercise before he could head for home.

Darryl was active on bush walks, often taking the role of leader or ‘tail end Charlie’ whenever required. After all of this, Darryl still found time to volunteer at Open Days, on behalf of Y Striders,  at Triathlons and Fun Runs and at various other activities, especially those that required a sausage sizzle.

Weekends away also found Darryl involved in reconnoitres, identifying rest places and then carrying all the paraphernalia needed to make everyone tea, coffee and muffins at the rest stops. The Sunday night BBQ, the highlight of the weekend, was also organised by Darryl, buying for everyone, cooking and making sure everyone was happy.  He even transported the big barbeque from his home!

The Anne Rinaldi Fun Run/Walk became one of Darryl’s most well-known contributions.  He delighted participants by perfecting the Bacon and Egg Strider muffin.  He did the shopping, was always at the venue early, organised his team of helpers and began the cooking.  Returning runners and walkers were delighted to find Darryl wearing his chef’s hat as he assembled each muffin and watched them being devoured by the hungry athletes. Although Darryl has passed this job to other capable cooks, his legacy will remain.

There is no doubt that Darryl has given ‘distinguished service’ and ‘worked tirelessly’ for the benefit of the Club and its members.

Ken A, the club President formally presented Darryl T with his Honorary Membership to heartfelt applause.  This was in appreciation and recognition for all the hard work, organisation, the good humour, the kindness and selfless commitment needed to earn such a well deserved award.

Thank you, Darryl.  The Y Strider community recognises all that you have done to make Y Striders the positive, energetic, fun loving and amazing club that it is today.  We are so glad we could be there when your contribution was celebrated on Sunday.