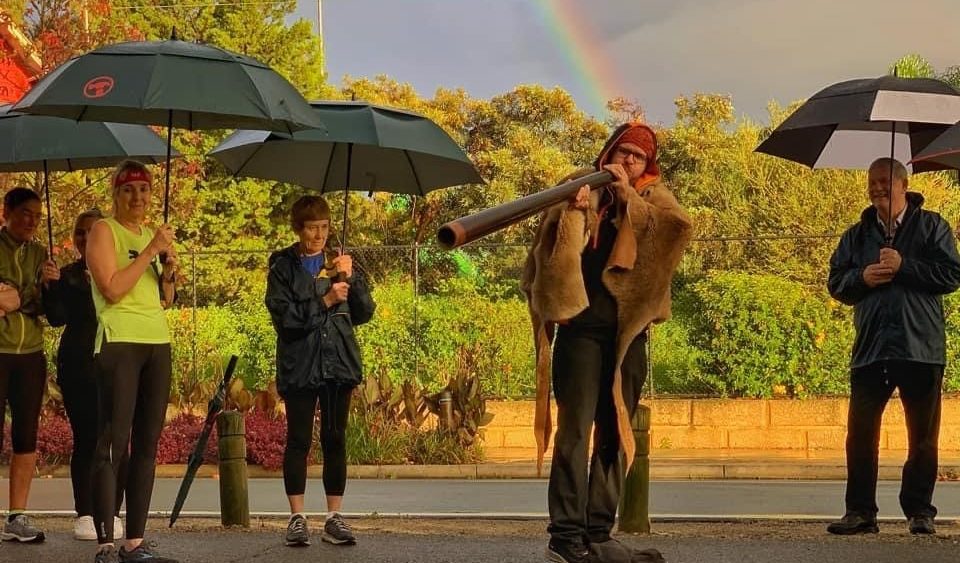 The Super Sizzling Six
On Saturday 29 May, the Y Striders contribution to celebrate National Reconciliation Week was to enter the 5km Run at Bibra Lake. The event was run concurrently with the Parkrun event, a free to enter, timed run or walk which takes place every Saturday morning at various locations in Perth, WA, nationally and other locations, in different countries worldwide.
Kathleen Miller, the City of Cockburn Aboriginal Community Development Officer, had organized free coffee and breakfast for all runners doing the course as a thank you to the Parkrun organizers for hosting the event.

As luck would have it on the morning of the event, thunderstorms and driving rain ensued deterring the not so willing participants. Needless to say, the Y Striders’ team after spending weeks and months of regular training in all weathers remained undeterred, possibly inspired by the idea of free coffee and breakfast!!!

The measured course of 5km at Bibra lake follows the cycle/walking path anti clockwise around the 6km perimeter of the Lake, as such the start and finish are separated accordingly.
Prior to the start a “Welcome to country” greeting was performed by the Aboriginal elder, Olman Walley, complete with didgeridoo and customary Kangaroo skins ( I couldn’t help feeling sorry for the hapless Kangaroos). Nonetheless the greeting was performed in the Noongar language followed by an English translation and a professional and entertaining rendition on his didgeridoo. The ceremony was brief but sincere and was greeted with loud applause even from the regular Parkrun runners (and barking from a dog!). As a final farewell Olman wished everyone well and commented on the conditions declaring “ At least if its raining you won’t have to worry about the snakes”!…… What the??

A light drizzle was on cue to the start of the event and all Striders went off jockeying for position on the narrow-congested pathway. The course was mainly flat with a few gradients before the last kilometer. The front runners went headlong through the inevitable puddles but most everyone else tiptoed or ran round the deeper ones.

All the Y Striders ran well, first home was Joan De Castro and Martin King who both finished inside the 30-minute mark, closely followed by Eva Hart and Ann Pritchard who ran together encouraging and supporting each other throughout. Afterwards Ann admitted that she was feeling good inside the last kilometer and had the urge to sprint to the finish but figured it was churlish to go before Eva stopped talking. As a result, both Eva and Ann, oblivious to their surroundings ran on, missing the finishing line. A frustrated official had to chase them down and usher both back through the finishing chute. In spite of the inattentive mishap both Supergirls finished first in their age groups.

Terry Pestana and Leonie Harper ran neck and neck all the way, both finishing strong in exceptionally good times with Terry just managing a 5 second lead and winning his age group. Not to be outdone Leonie was not only top of her age group but managed 6th best overall on her performance rating of 70.73%, Fantastic!

Loitering in the morning drizzle whilst clutching permutations of gratis egg and bacon rolls, yoghurt muesli, tea and coffee, our steaming hot bunch hijacked the only sheltered picnic table, trying to squeeze 6+2 sweaty bottoms into a six seater bench space. The conversation was lively, recounting their individual performances, except for Martin, perhaps, who perched quietly at the end of the bench. Eva, suggested that he is sulking, being upstaged into second place by a boasting, boring, septuagenarian who just wouldn’t “shut up” (Martin’s words).

Finally, many thanks to the Y Strider trainers, it seems that all their persistence, mentoring and patience is starting to pay off. The Bibra Lake Parkrun in the previous week fielded almost 200 entrants. On this Saturday however there were just over 90, and not including those unregistered who turned out to support the Reconciliation event. The usual event walkers from Y Striders were sadly missing and it seems that with the thunderstorms and driving rain, only the more robust were brave enough to shrug off their perceived fears to ensure a strong fast event. The athletes from Y Striders however were grouped well into the competitive range of runners on the day, having four out of six, finishing top of their age group.

All results and event details are obtainable on the “”Parkrun” website.

One thought on “2021 Run for Reconciliation”