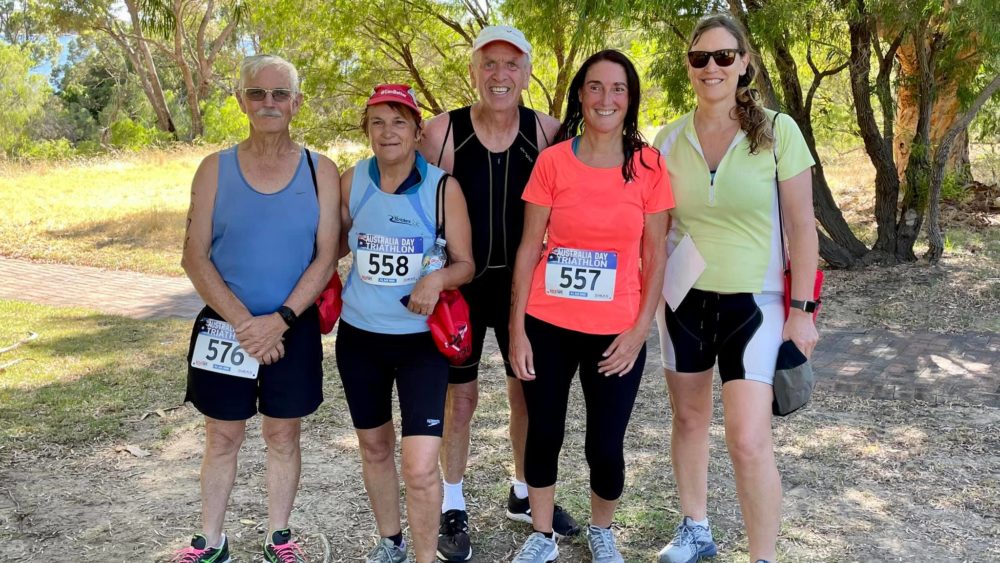 It only takes one Triathlon Whisperer (John W) to whisper in Ann P’s ear for the training to start for the Australia Day Triathlon at Point Walter. Surprisingly, it wasn’t difficult to find a group of like-minded people who were prepared to train and compete!

Team Y Triers, was formed consisting of Ann P, Cara, Martin and a protesting Eva. They registered for the event; it included a 200 metre swim in the river, a run up the hill, followed by transition and a 7 kilometre bike ride, and lastly a 2.5 km run. John W was also competing in the more serious sprint event that involved greater distances in all three sections of the triathlon.

They were a nervous team as the 3 women had never competed in a Triathlon and they were relying on Martin and John for help and advice. They trained regularly, with Saturday morning dips in the river and swimming the 200 metres, an unusual form of exercise for these runners.

Australia Day was perfect weather and each of the athletes excelled at one leg of the course. Martin was the fastest swimmer and the fastest overall. Cara excelled in the bike ride and Ann and Eva together were the fastest in the run. There were over 500 competitors in the event and Eva and Ann took the longest time of any competitor to transition due to wardrobe mismanagement!

The main message from the competitors is that anyone can do an event like this. However, having a group of friends to train with and to encourage you along the way, and on the day of the event, is what makes this achievement so valuable. Training together gives focus and helps everyone improve.
Eva Hart.

Below are responses from the rest of Team Y Triers:

Ann P
It was a fun event that I would never have imagined doing. It was all John’s idea! Training with Eva, Pam, Cara and Martin was the best part of it. We all encouraged each other. On the day, the encouragement and support we received around the course was just fantastic. Kay and Terry and Joan de C supported everyone for all the parts of the event. This support really carries you around the course and is so valuable. Cara and Martin beat us, but as usual I crossed the finish line holding hands with my buddy Eva.

Cara M
A Day in the Life of a Y Trier

Aiming for the buoy, no glasses, blurry haze.
Collision, arms and legs, was that Eva?
Salt water, currents, zigzag.
Missed the buoy, dogleg, shore in sight.

Martin K
All the gruelling distance training combined with the half marathon (21.1kms) successes has obviously paid off for Ann and Eva where the extra stamina loading after the arduous bike leg came to fruition.

Avoiding the typical wobbly leg syndrome consistent with most tri athletes both girls never faltered with and outstanding run beating Martin, their long time mentor by a full half minute. Nobody was more pleased than Martin (or so he said!!).

Cara was the dark horse demonstrating her cycling prowess by coming 20th out of 44 in her best discipline and winning first Y Strider across the line.

Martin, the veteran of triathlon struggled to finish in one piece (that’s his interpretation/excuse) haha. His transition (changeover) was slick and well-rehearsed gaining a valuable 4 minutes over his four Y Triers.