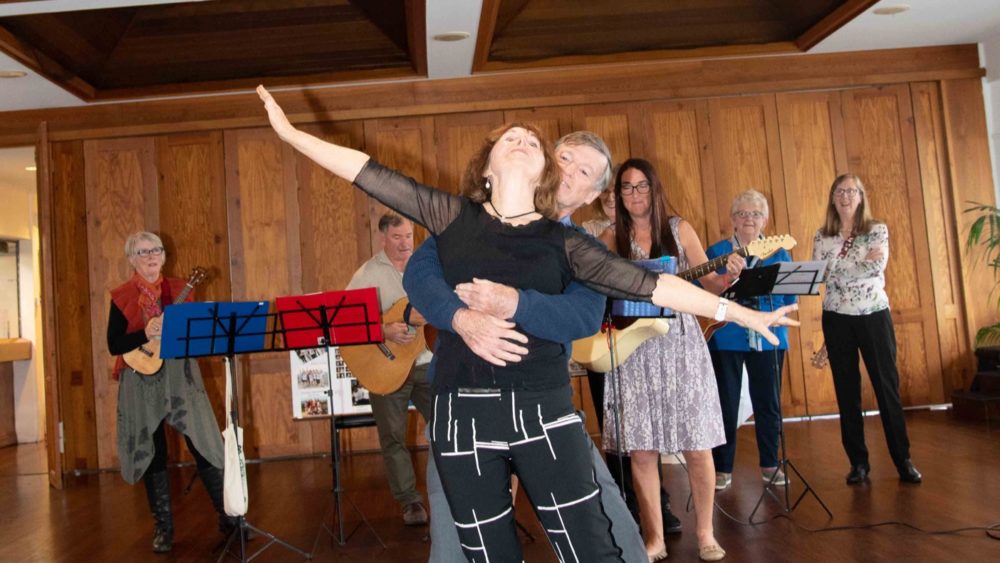 Once again, Y Striders organised an amazing birthday celebration with a great venue, good food, robust entertainment, a thought-provoking competition, a riveting auction, lots of Dad jokes and good fun with wonderful people. Well done Y Striders and thankyou to everyone who played a role in turning this into such a happy event.
Although the weather was rather dreary for such a momentous celebration, Y Striders turned up at the East Fremantle Yacht Club with happy smiles, ready to enjoy themselves. It wasn’t long before our tireless MC, President Ken, had everyone organised and ready to start the celebrations.
After the main course, Ken gave a brief history of the past 25 years of Y Striders. He emphasized that Y Striders has adapted throughout the years but at the same time has kept the key aspects of being a welcoming and non-competitive club. This is a club where members can find friends and others who will challenge them to continually improve.

After dessert, the entertainment began! First up were the Ukulele players, strongly supported by Ann P and Chris B on guitar. They lead the group through some favourite old tunes. Then Ann P and Eva H sang the beautiful song, My Heart Will Go On, only to be interrupted by our hilarious Titanic stars, Ann R and John W who proceeded to show us all how Leonardo di Caprio and Kate Winslett should have behaved in the prow of that boat!! No-one will be able to watch the movie with a straight face again. To finish, the musicians supported by their audience, rounded off their session with a joyous rendition of Rockabilly Rebel.

Everyone has a past, and Christine Hutcheon had been secretly uncovering interesting facts and details about some of our members to use in the “Who Am I?” quiz. We all found out fascinating details about Christine H, Bill S, Ann P and Mieke V. Each revealed unknown features of their lives before becoming a Y Strider. There are still many interesting stories to uncover about our Y Strider family.
The last major event of the afternoon was the Raffle of the historic Y Strider vintage wine. This year we had the ageing bottle of “a Y’s Drop” and Christine donated a bottle of “Nannup Nectar” to add to the bottles to store for next year. Fortunately, there were 3 bottles of more recent and much more drinkable wine to add to the raffle as well. Christine, armed with her gavel, led us through the auction and bidding was fast and loud. Sometimes we had partners pitted against each other in the bidding race. The winner, at a hefty sum was Mark Beever. Congratulations Mark, on your generosity and on being the winner of this selection of wines.

Nancy W had compiled a photo and video montage that was very entertaining. This included photos and videos of Y Striders over the years. Members gazed in amazement at their younger selves and the many events held by the club. There was also a board where Y Striders posted photos from over the years. Again, these drew laughter and some sadness as members reminisced over events and members from the past
Many thanks go to Ann R and Elizabeth T who spent numerous hours organising the venue, the meal, advertising the event, collecting names and payments and the other details that went into making the day a success. Thank you, Ken A for being the MC and helping with arrangements. Also, thank you to the musicians, the Pheasant Pluckers, Christine H for your contributions, Ros C for flowers, Nancy W for photos  and everyone else who willingly helped out with the arrangements. Nothing would succeed without the kind and generous donation of your time and energy.